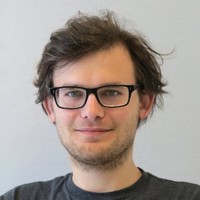 Back in the late 1970s, HP developed the HP-41C range of calculators. Wikipedia does a much better job at explaining, but it suffices to say that it was the backup calculator on the Space Shuttle. It doesn’t get much cooler than that :-)

Being a bit of a 'fun old electronics hoarder', I kept the old HP to repair at some point in the future. It took 15 years, but we finally got there :-).

Note: This is an attempt at regaining a working calculator, and not a restoration. The Baumgartners of the electronics words will likely want a word with me. [TheCalculatorStore] has a wide selection of replacement parts in case you prefer the 'restoration' route.

Upon inspection, the calculator suffered from three well-known HP-41 ailments: 1) a cracked housing and posts, leading to a bad 'zebra' connection; 2) loose solder joints to the LCD, leading to a vague display; 3) a non-functional key.

There are two main options to fix the zebra connector: either replace lower posts so that the connector (or a new one) makes good contact, or remove the connector altogether and replace it with thin wires (see, e.g. [stefanv]). I opted for the latter option, given that I had fairly thin wire around.

Using 0.4 mm diameter transformer wire and a lot of patience, I was able to solder everything together. The result can be seen in Figure 2 — not the cleanest wiring or soldering, but functional. The solder joints were covered with electrical tape to reduce the risk of short-circuits.

Some suggestions if you intend to follow the same path:

The screen was a simple fix: the two bottom-most joints were no longer soldered to the PCB and made intermittent contact. This was resolved by re-soldering the connectors.

The keyboard was the most painful affair: the '1' key did not respond to keypresses at all, even though the key did still 'click'. Following suggestions on the HP Museum forum, I initially attempted to repair this through a bristle brush and contact spray, but this did not get the key back to life.

So, instead, I cut all the plastic keyboard posts (50 or so!) to remove the keyboard PCB. Flipping over the PCB reveals a set of metal domes under a plastic sheet (Figure 5). As nothing clearly was wrong here, I cut the sheet three sides around the dome, and opened it up to clean under it. After cleaning the crust on the PCB, the dome was replaced and taped back. A quick test showed that the button worked again!

The next challenge was replacing the PCB in the housing: after all, the plastic posts now wouldn’t hold the PCB in place anymore. As a fix, I used hot glue to glue the PCB to the same post it was held to originally. Most likely this glue will not hold up as well as the original molten posts, but time will tell.

I made two more adaptations: First, the screw hole for one of the top posts had worn away. This was resolved by gluing a thin piece of sturdy plastic on the inside, and using a thin drill bit to (manually) drill a hole for the screw. Second, as I intend to use the calculator as a desk calculator, I sacrificed a USB cable to be used as power source. The 'halfnut' models have two conveniently located pads on the PCB, to which I soldered the USB cable. If you want to use the side hole, don’t forget to first get the cable through and then solder the cable to the PCB :-).

After two half days of hacking away, I now have two working HP-41’s again! One will stay on my home desk, the other will likely make its way to the office. The programming capabilities will likely not get used a lot (Python is just a lot more convenient for that!), but I definitely prefer the feel of an HP keyboard over trying to use Google or Windows Calculator!